Young Adult marks Jason Reitman’s first film since 2009’s critically acclaimed Up in the Air. Written by Juno’s Diablo Cody, the dramedy centred on CharlizeTheron’s emotionally stunted ghost-writer initially appears to be fitting companion piece to Reitman’s powerful depiction of a career-dedicated life.  However, despite a terrific turn by Theron, the film is marred by a third act devoid of heart, substance and sensibility. 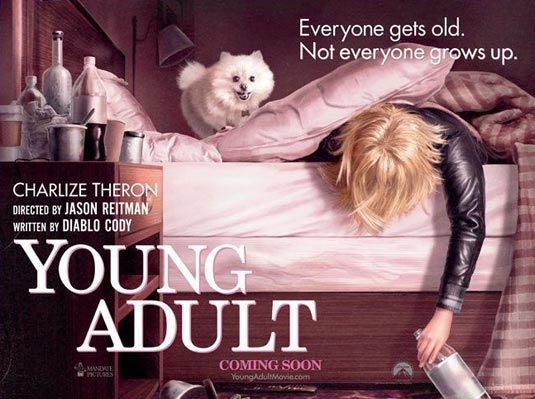 Young Adult is released on 3 February in the UK

Theron is Mavis Gary, a 37-year-old author of a fiction series for young adults.  Recently divorced and being pressured to complete the series’ final book, Mavis trudges through life with her loyal Pomeranian by her side.  Her life of boozing and laziness becomes disrupted by a birth announcement from her former beau, the now married Buddy (Patrick Wilson). Mavis sets out to rescue her ex from family life- which is likened to being held hostage.  Returning to her home town from Minneapolis under false pretences, Mavis encounters an array of blasts from the past, including “hate crime guy” Matt (Patton Oswalt), left disabled after a high school beating and now living with his completely under-developed sister (Collette Wolfe).  Aware of Mavis’ true intentions, Matt acts as her confidant, drinking partner and the voice of reason (duly ignored, of course).  Stubbornly insistent on reclaiming her past glories, Mavis presses on with her plan to steal Buddy away, resulting in painfully awkward consequences.

Theron’s performance is the biggest redeeming quality in a film whose central character is actually beyond redemption.  She injects vigour into Mavis, who could have easily been played as more down-trodden.  She creates the insular world Mavis inhabits and keeps the character likable enough, despite her serious flaws, so that come the big, multifaceted reveal, a sympathetic response feels natural.  Yet, for all the effort Theron puts in to reach that point, the film rapidly rushes downhill from there.  Her final scene with Matt is as awkward as anything else in Young Adult and is a real “No, don’t do it, mate” moment.  That the character of his sister is so under-developed would matter little were it not for her impact on the final outcome.  Whatever point Diablo attempts to make is lost in the sheer shallowness of the logic she employs.  Investing in the story of Young Adult and in the character development of Mavis proves to be a terribly unsatisfying experience.  This might have been more excusable if the film had been a lot more entertaining in reaching its conclusion, but it’s never as funny or as clever as it seems to think it is.  Young Adult is competently composed otherwise, with a strong supporting cast, even if most of them have little to do.  Oswalt gets some decent dialogue to play with, but again, the final few minutes leave a sour taste.

While Young Adult does bear many similarities to Up in the Air, where it diverges (and goes quite wrong) is when it forces the audience to leave their sympathies with the peripheral characters that are only ever seen through Mavis’ eyes.  In Up in the Air George Clooney’s character took a risk; he tried to change and when it went pear-shaped, the viewer could feel for the actual character that they had gone on this journey with.  Films don’t need a happy ending to work or to be enjoyable.  However, despite a superb display by Theron, Young Adult is not an example of such films.  7/10